International students who have not been able to come to Japan yet due to Covid 19, participated in an online class on furoshiki wrapping.
First, we instructors explained the outline of furosiki, such as its history, material, and size. After that, the students learned how to wrap a furoshiki by a method called Hon-musubi. *2 With this basic method, you can wrap items tightly and easily unwrap them when unwrapping. Initially, the instructors used a string that was easier to wrap than a furoshiki.
The participants were divided into small groups and tried hon-musubi for 10 minutes. Most students used bandanas or scarves instead of furoshiki.
Those who attempted to use a thick blanket somehow managed to wrap in the hon-musubi style well. The students seemed enjoyed very much the training session of furoshiki wrapping.
Finally, all the participants returned to one room together. We demonstrated other wrapping methods; the first one was to wrap round items like a ball, and the second was to wrap lengthy objects such as a single or two bottles. Some students enjoyed wrapping items by themselves while looking at the screen. When those students visit Japan, we hope they will use furoshiki that can wrap everything in their life in Japan.

*1 Futosiki are traditional Japanese wrapping cloths traditionally used to wrap and to transport goods.
*2 One of the names of how to bind the rope. Hon-musubi is the Japanese name for the reef not or square not. 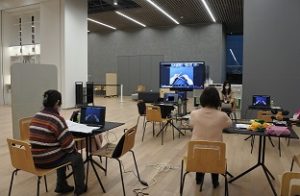