An online ikebana demonstration was held for the JICA Yokohama Participants overseas. Ikebana is a traditional Japanese flower arrangement. The ikebana classes are usually held face-to-face, but this time the class was live-streamed for the first time. I thought that most participants would come from the countries which were in similar time-zones to Japan. Two people, however, were from far countries: Eritrea and Niger in Africa. I was glad of that. During the demonstration, some troubles happened. Some participants didn’t show up when the class started. The internet connection with the African participants was so bad that it was often cut off, and either the voice or the image kept breaking up. Despite these troubles, the East Timorese who were able to keep taking part in all the online ikebana said “We had a good time! Thank you!” They also told that many sunflowers were in bloom in their country. 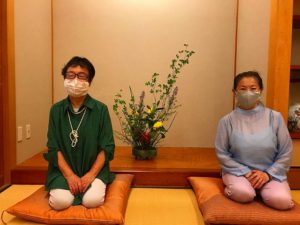